“Mr. President, the world’s dying to know: Is it boxers or briefs?” asked 17-year-old Laetitia Thompson from Potomac, Maryland of then President Clinton during a live MTV forum in April of 1994. “Usually briefs,” he replied. Adding, “I can’t believe she did that.”

Back then, those were really the only two choices for men.  Fast-forward to today. The number one selling men’s underwear silhouette has become the pragmatic boxer-brief – combining the coverage of a boxer with the form fit of a brief – the best of both worlds. And here’s an important little fact: of the many unofficial polls asking women their underwear preference on men, the boxer brief always wins by a landslide.  Why? Women like Its body-conscious fit in the back – not the front. So, given the industry’s statistic that women buy the lion’s share of men’s underwear, it’s no wonder boxer brief sales have shot up to #1. Now, they’re even being made in sizing up to a 6XL for a 46” waist.

The Birth of Boxer Briefs

The genesis for this new men’s underwear silhouette began with the appearance of Richard Gere in the 1980 film American Gigolo. During his gravity boot work-out scene, Gere was wearing a pair of skimpy soft grey jersey shorts designed by Giorgio Armani. Next came 16-year-old Mark “Marky Mark” Wahlberg posing in a 1992 ad for Calvin Klein’s new men’s underwear – yet to be called boxer briefs. The Calvin Klein men’s designer at the
time, John Varvatos, says his inspiration for the new silhouette came after taking a pair of long johns and cutting the legs off.  He felt this prototype was both comfortable and looked “cool.” He was right. 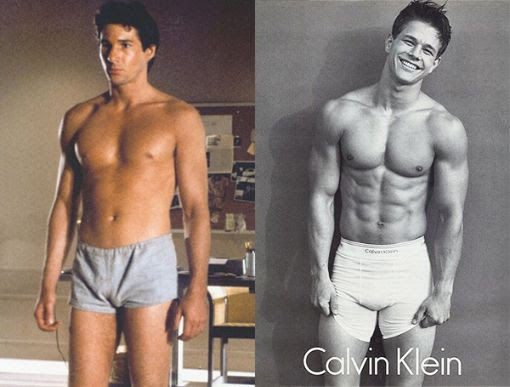 Reasons to Upgrade Dad
Studies have shown, and personal chit-chats I’ve had at social events concur that most men pick an underwear style during youth and just stay with it.  Ask a man “why?” and the simple answer is: it’s the same style his Dad wore. But, give a man an upgraded piece of underwear and a new world opens for him.  The boxer brief silhouette is the perfect transition because it has features he’s already familiar with in his boxer or brief.  Plus, it solves all the underwear issues he’s been living with: bunching, chafing, constant tucking, VULs (visible underwear lines), lack of support, and chronic “readjusting.” But the cherry on top of his underwear upgrade is the benefit you’ll receive looking at him in a newer, more attractive, modern undergarment.  It’s a win-win!
Best Boxer Briefs by Body Shape
Boxer briefs are flattering on pretty much every male body shape. Their coverage not only provides support but also gives modesty and camouflage to less-than-perfect physiques.
Big Dad
“Fat guys OWN chafing!” writes one rotund male influencer while claiming boxer briefs as being the best underwear for fat guys. Heavier men suffer from leg chafing. The longer leg of the boxer brief puts extra fabric down the leg to help prevent your thighs from rubbing together.
Portly fellas will also need a waistband that is neither thick nor tight. A thicker band tends to be more constricting and causes a muffin top-like double belly. They can also collapse and double over. The outcome of a too-loose band is seeing something you wish you hadn’t when he bends over.  So, look for waistbands that are stretchy while gently hugging his waistline. Also, keep them less than 2 inches tall.
Short Dad
Boxer Briefs come in a variety of lengths.  Dads who fall below the 5’8 mark will look their best in boxer briefs with a shorter inseam – about 2- 4”.  This shorter leg will create the right visual proportion of looking taller and more slender. If he’s also athletic, he can wear longer ones under his shorter workout shorts for a more youthful and modern look too. 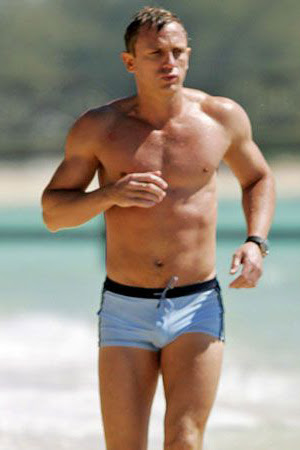 Many dads today work out regularly and are proud of their physiques. So, they will probably look their best in the sexier brother to boxer briefs – the trunk.

Many women will still remember the scene in Casino Royale when 007 (Daniel Craig) emerges from the sea wearing a baby blue suit and a six-pack. That now-famous swimsuit was from the 2006 Grigioperla Spring/Summer Collection (La Perla’s former men’s brand) and reignited interest in the old swim trunk silhouette from the ’50s. The men’s underwear industry took note. They shortened the legs and lowered the rise of their boxer briefs and launched what they now call the trunk. Considered to be the more fashion-forward choice for toned men, they still keep everything in place with a close, supportive fit while showing off a little more skin.  They are also the preferred choice for men wishing to show off their muscular thighs.

Boxer Brief Upgrade Strategy for Dad
Dad’s personalities are as different as their fashion preferences.  So, some will be game to something new, and others may need to take it slowly.  Here are some suggestions on different approaches.
Slow & Easy Approach
The 101 boxer brief for the first-time wearer is one in basic black made of cotton or modal.  Not 100% cotton, because it will quickly start bagging and not look sleek.  Black, because everyone looks polished and thinner in black.  Plus, darker colors hide stains.
Fun Approach
Like ties and socks, boxer briefs now come in a variety of patterns and prints. Does Dad have a favorite hobby? Favorite team? Favorite vegetable?  There’s probably a boxer brief print out there he’ll relate to.
Sophisticated Approach
Maybe Dad’s not a jokester.  There are also boxer briefs made in solids, grown-up prints and plaids to give him an air of sophistication.  You can keep him looking classy, while also showing him you know how to celebrate and have some fun.
Complete Overhaul Approach
Some dads just need a complete underwear overhaul. For the dad who needs to start fresh, buy him a bunch of multi-packs.  No card necessary.
For more on men’s underwear silhouettes, I made a video you might enjoy watching.
My Final Thought…
It’s personally been a treat putting together this “Talk” as we near Father’s Day in a couple of weeks.  It has brought back such fond memories for me of my Dad.  I wish he were alive today so that I could gift him with a pair of boxer briefs.  He was the consummate crisp Brooks Brothers 100% woven white boxer wearer and always sent them out to be professionally laundered.
Wishing all the father figures (wherever they are) a very happy Father’s Day.  You are loved and remembered.