Tomima Talk: Are You Wearing your Bra Too Low?

My team and I started tracking a recurring behavior in our Fit Lab Studio. New models coming in to have their bra sizes checked would come out from behind the curtain initially wearing the bras we gave them sitting too low on their chests. We even saw a few intentionally tugging their bras downward, while walking over to be photographed. It wasn’t until I was comparing some fit notes with the oh-so-fabulous Fredericka Zappe, National Fit Director for Eveden brands (Fantasie, Freya, Elomi & Goddess), that we discovered we had been witnessing and correcting this very same error – women are wearing their bras too low on their torsos and don’t know it.

Now, some of you may think, who cares? Well, this is problematic for a number of reasons. When a bra is being worn too low – especially D cups and larger – the underwires are not resting in a woman’s natural underbust breast creases. Instead, they are pressing further down on her ribcage, which is uncomfortable and can be painful. Low-wearing bras do not lift a woman’s breast tissue off her ribcage. Instead, an under-breast skin fold is established and sustained inside the bra’s cups throughout the day. This skin fold gets hot, irritated, red, and moist, thus establishing an environment for skin issues to develop. This low and improper bra positioning prevents a supportive bra from doing what it was designed to achieve; breast uplift and support. Many who wear their bras too low can’t wait to take them off at the end of the day and simply conclude it’s the bra’s fault for her discomfort.

Signs Your Bra is Too Low

Let’s start with some examples. When wearing a bra, does your cleavage look like any of these models?

Each of these models is wearing her bra too low. Telltale signs include:

– a vertical split cleavage line
– no breast tissue in the very bottom of the cups
– breast mounds not appearing to be aligned with the curve of the underwires
– the illusion of a tall oval-shaped breast rather than a more spherical breast
– sagging, unsupported breast tissue
– underwires resting on the rib cage

The last model, wearing black, is not only wearing her bra too low, but her cups are also way too small, as indicated by the extra breast tissue exposed in front of her underarms. Wondering where I found these images? On the VS and LB websites. Each is an image of a product currently for sale; and there were many, many more like these. I just grabbed the ones from the first pages.

Here are some images of a model taken in our Fit Lab Studio to further show you what is going on inside the cups of a bra when worn too low on the torso:

Now, here is the same model in the same bra, but a band size smaller. She has put the bra on correctly; making sure the underwires are in her breast crease and the straps have been adjusted:

When comparing the two first images, see how much higher her breasts are sitting and how much thinner our model looks with her bra positioned correctly?  Also, her cleavage line now looks correct. The side image shows there is no skin-on-skin fold and instead, her bottom breast tissue is in the cups and not resting on her chest. I also want to mention that women who wear t-shirt bras tend to make this mistake more often. It makes sense when you think about it. A t-shirt bra’s cups are pre-formed and lined with a thin layer of foam. This construction beautifully masks where a woman’s breast tissue is landing inside the cups 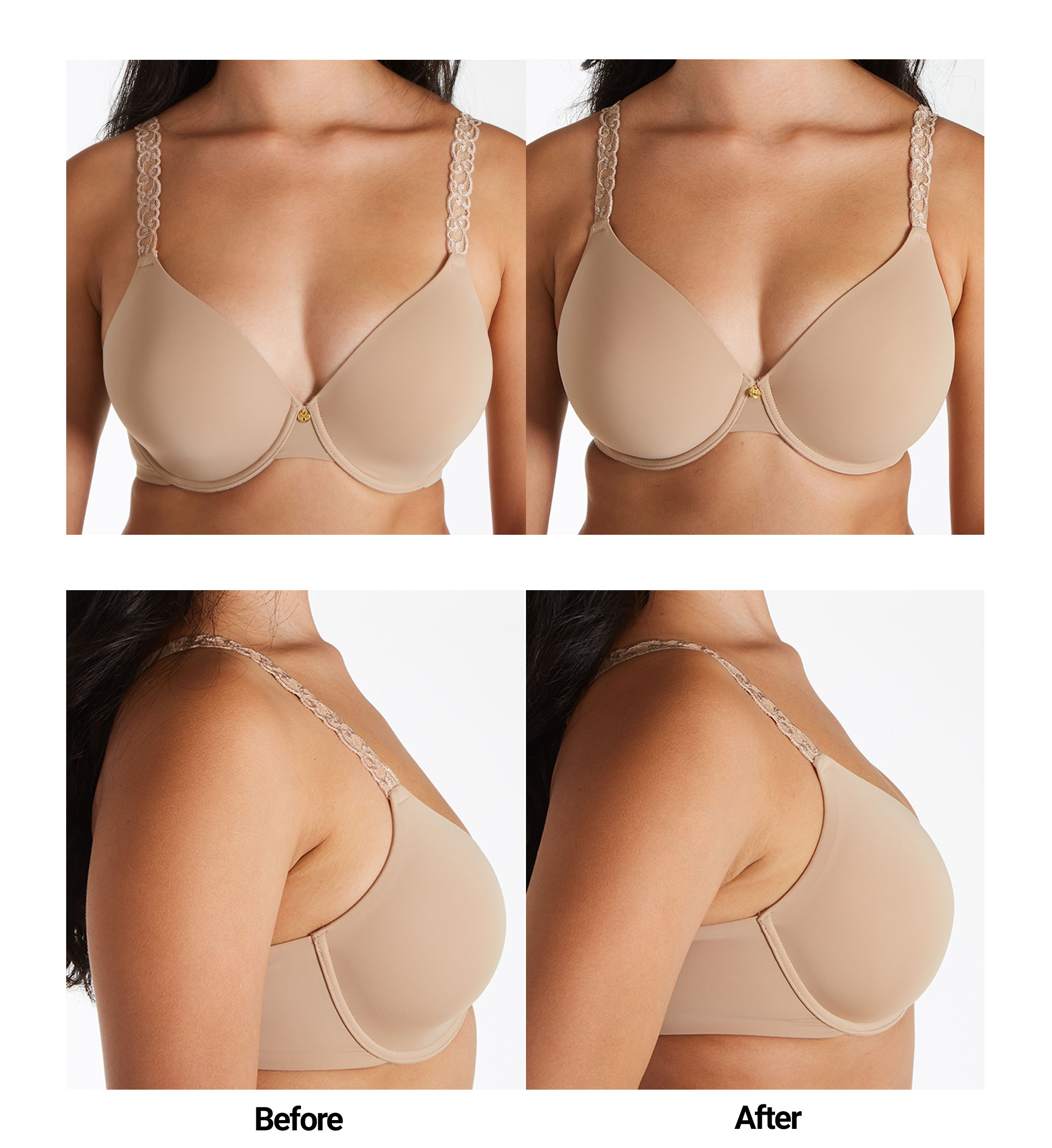 If you think you’re wearing your bra too low, first, find where your underbust breast creases (also called a mammary folds or breast roots) reside on your chest. Take a minute and raise your breast tissue in front of a mirror until you see this crease. Your natural underbust creases are where the underwires should rest. And if you’re seeing red lines created from your bra below these creases, it’s another indication, you’re wearing your bra too low. 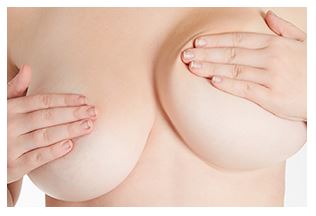 Two things need to happen to get your bra up and resting in its correct position: you need to find your correct bra size and put your bra on correctly.

Correct Bra Size – Here’s how you probably ended up wearing your bra too low.  Either, you are wearing a very worn-out bra, where the band has stretched out.  Or, you wanted a comfortable bra band, so went up a band size or two. Well, without a firm band to hug you, it simply slides down your torso – think socks where the elastic around the top is shot. Your straps may also have loosened, or you simply never adjusted them. I know there is this new trend suggesting traditional bras are not comfortable and less structured bras are the answer.  But this is a very slippery slope because most of the “comfort bras” on the market today do not have the support most of you need long term. Here’s the reality: the most comfortable bra will always be structured, in your correct size, and located on your body where it was designed to be.

Correctly putting on your bra – Personally, I’m a “spinner” when it comes to putting on my bra.  I fasten in front, then spin my bra to the back and pull it up.  But the key to putting on a bra correctly is pulling it up and into your breast creases BEFORE pulling the straps onto your shoulders.  The bra band should stay in place without the use of straps.  If you need straps to keep your bra up and in place, your band is too big. Next, reach in with your opposite hand and pull all your breast tissue into the cups and in front of the underwires on each side. Now adjust your straps. If after doing this, the band slides down, it’s too big.

Here’s a bra-fitting revelation for you. When a full-coverage bra doesn’t fit a woman (too high on her neck, straps too long, cups have too much coverage), it’s not because she’s short-waisted; it’s because she’s high-busted.  Put another way, she can be short-waisted, long-waisted or average waisted and still find a full-coverage bra giving her too much coverage because her breasts are simply located a little higher on her chest wall. And high-busted women more than others wear their bras too low. To give you a sense of what high-busted looks like, actress Christina Hendricks is an example.  I also found a few other examples on Instagram:

These high-busted women thus have a little bit higher bust crease, which means a little less vertical room from their shoulders down to their underbust crease. Of course, women who are petite in height (less than 5’4”) tend to also be high-busted due to their reduced vertical proportions, but still, not all petite women are high-busted. Many can wear a full-coverage bra style without issues.

There are lots of bras on the market that will fit a high-busted woman. She just needs to know what features to look for and which ones to avoid.

If after reading this you have determined you are high-busted, here are the types of bras that will work best for you. Look for bras with a plunge, demi, or balconette neckline. These necklines have less chest coverage. They also have shorter underwires both in the center and under the arms. Bras with sides measuring less than 4” tall will be more comfortable and not poke you.  At HerRoom, we tell you the side measurement of every bra in our fitters’ comments.  And, bras with center-pull straps will help to keep the straps on your shoulders.  Because you have less room between your breast crease and shoulders, you should avoid bras that identify as being full coverage, have tall center panels, come high under the arm (our 360° spin shows you this), are designed with wide-set straps, or have tall sides. These features will get in the way as you search for a comfortable, great-fitting bra.

Freddy, from Eveden, was kind enough to identify the bras in their suite of brands that best fit a woman who is high-busted:

Elomi – All bras in this brand have the characteristics to fit a high-busted woman, with The Morgan, The Charley Plunge Bras, The Cate, and The Matilda bra styles being standout winners.

Goddess – The Sarah bra style has been working well for women who are particularly high-busted.

Freya –  The two Offbeat bra styles work well for high-busted women, too. They also have a youthful design that a younger customer will find very appealing.

Fantasie – Their best styles for a higher bustline include their Illusion and Fusion styles.

Underwire bras these days seem to be on everyone’s “hit list.”  But they are not your enemy.  Once you find your correct bra size, put it on correctly, and adjust the straps, an underwire bra is the most comfortable bra you will ever wear. The exception to this statement will be for women who wear around a 44-band size and larger.  A considerable amount of both body tissue and breast tissue is present, so a wire-free bra will feel and fit more comfortably. And because a wireless bra provides a less exacting fit, it relieves the wearer from having to find her exact underbust crease or contend with a poking underwire that could be resting on her uniquely shaped breast tissue. The good news is that bra manufacturers have learned from these women. There is now a larger selection of wire-free bras in these sizes that fit extremely well, while also being comfortable to wear.